Today was our first full day in Shanghai, a clear start to the day, but as clouds built the rain began to fall! We have certainly noticed that the weather is different, coming earlier this year, the temperatures are much cooler, the forecast says that it will be warming up this weekend though. 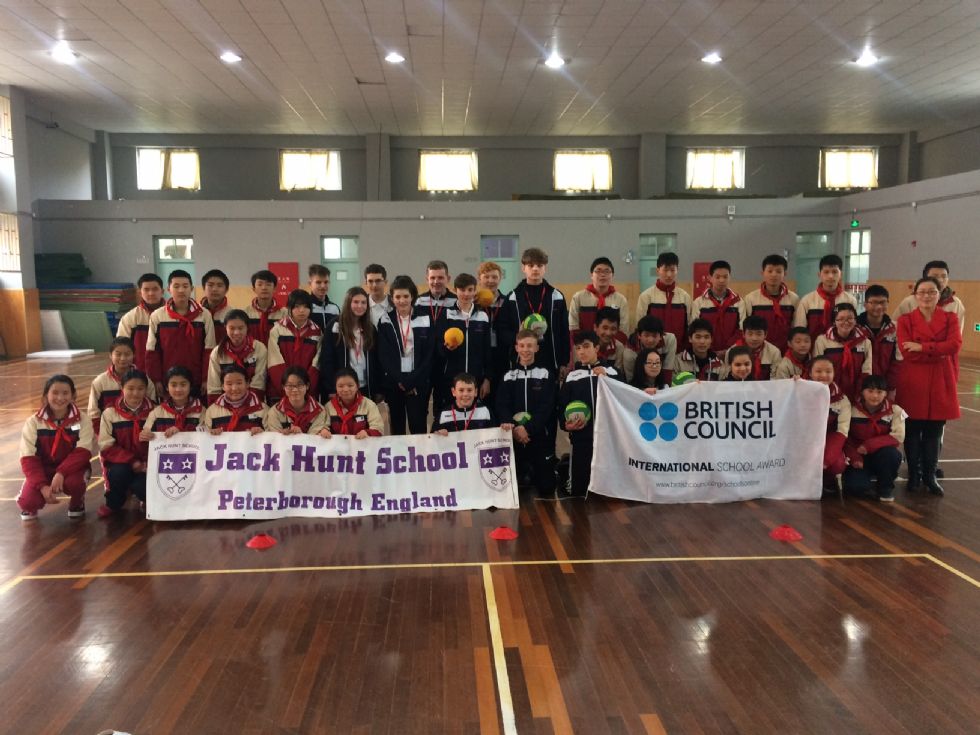 Today was our first full day in Shanghai, a clear start to the day, but as clouds built the rain began to fall! We have certainly noticed that the weather is different, coming earlier this year, the temperatures are much cooler, the forecast says that it will be warming up this weekend though.

The students slept well, and not many waking up early with jet lag (except for Mr Smith!) we all needed a good sleep after a long day of travelling followed by a day here yesterday. First breakfast today and always a bit of a challenge, as this is the meal that is so different from home, steamed bun, purple sesame dough (?), churros and a boiled egg. Some were more adventurous than others, and some had a follow up cereal bar. We are being very well fed and encourage the students to try all the new things, as the trip progresses we see them being more and more confident in trying new foods. 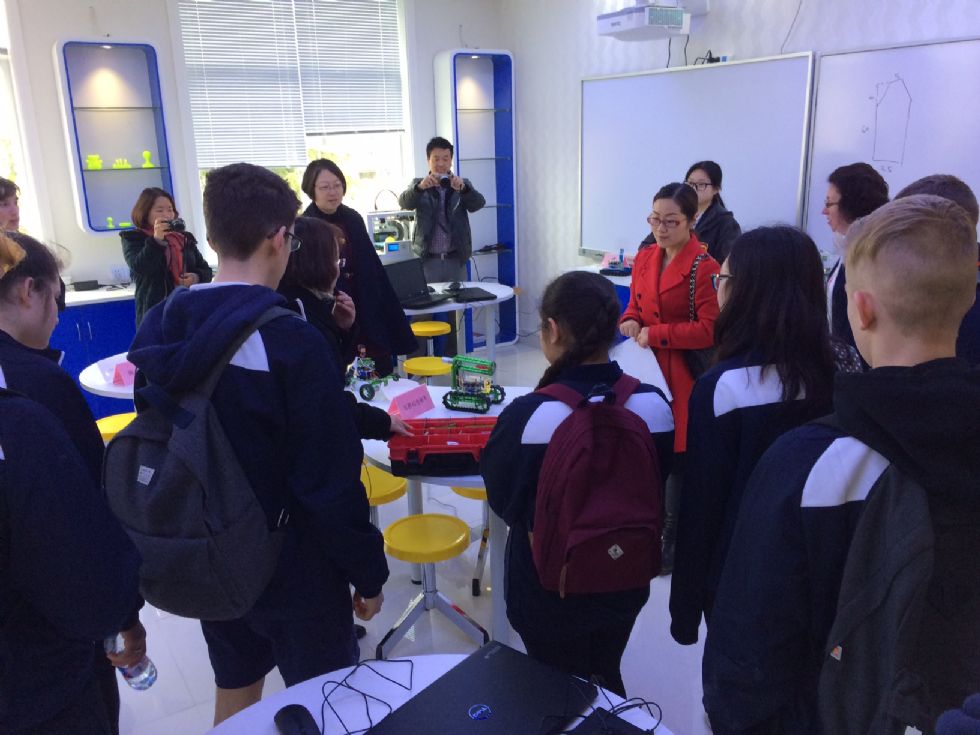 After breakfast we all got on the new school bus (electric), and drove to Pu Xing school, this is a state run middle school. The headmaster  - Mr Ren, is quite an innovator as he sees the arts in the curriculum as being just as important as the academic, this is not the usual view in China, so he has invested heavily in a fantastic ceramics centre and some state of the art design facilities – we were impressed by the range of ‘robots’ that students had built, there were machines to take in our washing when it started to rain or got dark, machines to blow bubbles and a football playing robot (Mr Smith played with that for a good ½ hr!) The students were also very impressed by the bank of 8 3D printers!

It was good to catch up with several staff from the school who have visited Jack Hunt over the years, Mr Shu, who came on a previous student exchange and Wei Ling who visited us as part of a PIXL International project.

In the pottery we decorated a traditional Chinese teacup, inspired by a range of traditional designs, of varying quality! We worked with some Chinese students who were able to assist our students with translating their names into Chinese characters. This year no one managed to break their pot and so these works of art will be fired and delivered to us before we leave. 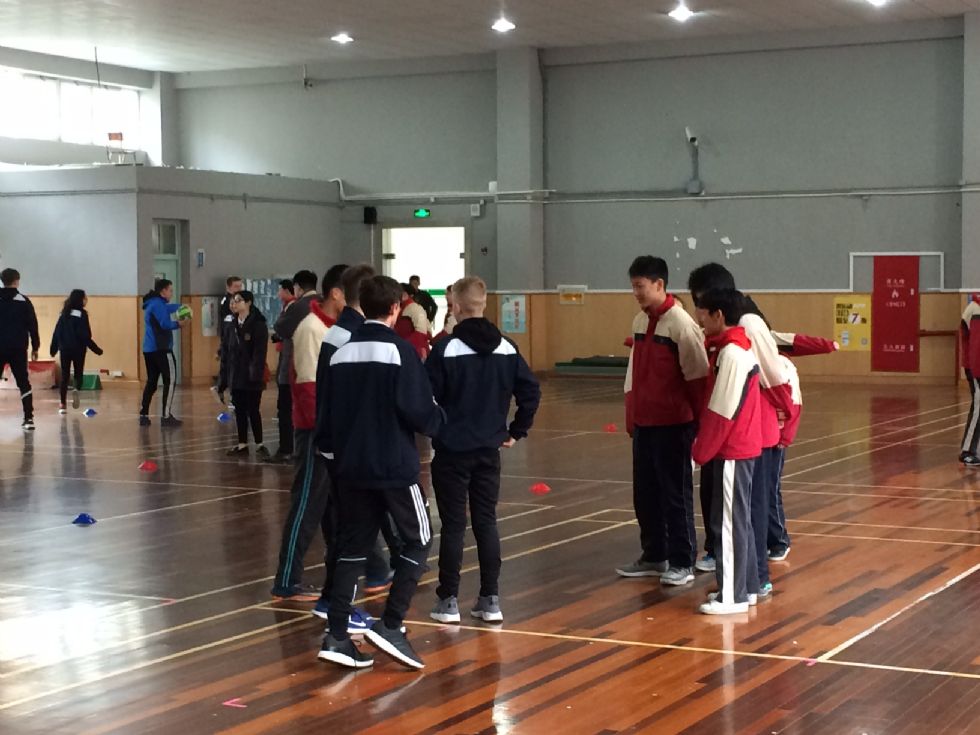 After ceramics it was to the sports hall, time for our first dodgeball training session . This is where students really need to step up to the mark, working in teams of 4, they run through a warm up, ball skills element and then a dodgeball game. Skills are quickly developed as language can pose a barrier, so demonstration and modelling are key. It was amusing at one stage to watch Mr Smith demonstrating to one of the groups the ‘stuck in the mud’ game – our warm up and essentially running around in a circle followed by 8 students in what looked like a game of ‘follow my leader’! Very soon activities were well underway, and some nervous looking faces on both sides soon beamed with smiles. The dodgeball games got very exciting and students really threw themselves into it. There were 8 PE teachers, from other schools in Pu Xing district coming to observe and it was clear that they were impressed, and in the manner of PE teachers globally, couldn’t sit back and watch, they were soon all in and playing! One in particular, in old school PE teacher style, was adamant that he would be the winner of the game!

At the end of the smaller games we had the Annual England China international Dodgeball game, and once again England were the winners, I think our team have had a lot more practice!

At the end of the lesson all the Pu Xing students lined up and came forward in turn to shake hands with Mr Smith, bow and thank him for the session.  Mr Smith was totally unphased and explained that this is quite common for him and the usual plenary session for his PE lessons back at Jack Hunt!

Lunch was very welcome, fried rice, pork and greens, with a very good tomato soup. The students were all eating in silence, a sure sign that the food is good and they are hungry!

After lunch we had a conversation session with some of the Pu Xing Students – 3 of who came to Jack Hunt on the exchange a few years back, now in their final year at Pu Xing. It was a great chance for them to practice their conversational English as they prepare for their very important exams, dependant on the outcome of these will hang the High school that they will progress to; schools are selective, much like a grammar school system and so there is real pressure on the students to do well. As we walked round the school we were impressed, especially Miss Wheatley on her first visit to a Chinese school, how all the classrooms were traditional style, students in rows, all working silently. 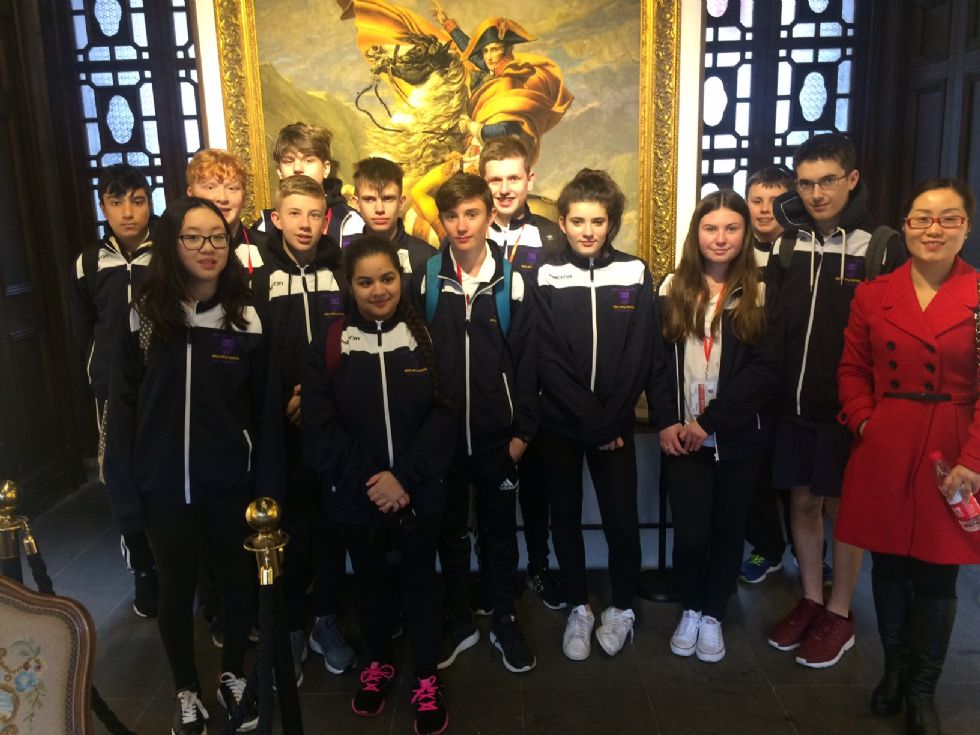 We exchanged some gifts with the staff and said farewell then drove a short way to Gaoqiao Ancient Town, here we had a chance to see some of the traditional old houses and  some traditional crafts. Some artists did a display of calligraphy and painting, also we visited an embroidery workshop, all done by hand, some of the pieces can take up to 2 years – for example the Napoleon tapestry behind the students in the group photo.

All our students have now met with their homestay students, a great opportunity to get to know them before they go off for the weekend. It means they are all more relaxed about this and less worried. Two of the students came up to the dorm tonight to say hello, in between lessons, their last class tonight going onto 8:15! The Chinese students certainly have a very long day!

All are well and having fun.