All students slept well again, however the Jet lag really seemed to kick in with Mr Smith and Mr Barwise, who’s bodies decided that yet again 4am was the best time to wake up. Today was a full on day of sightseeing and over breakfast; Vegetable spring rolls, meat dumplings, cold fried egg and churros, the students were excitedly discussing their shopping lists for the visit to the flea market.

All students slept well again, however the Jet lag really seemed to kick in with Mr Smith and Mr Barwise, who’s bodies decided that yet again 4am was the best time to wake up. Today was a full on day of sightseeing and over breakfast; Vegetable spring rolls, meat dumplings, cold fried egg and churros, the students were excitedly discussing their shopping lists for the visit to the flea market. 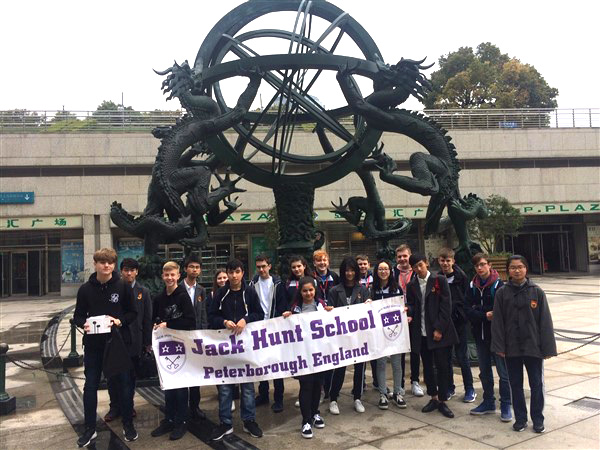 Our first stop of the day was over at the Science and Technology museum. We were accompanied by all of the students host families which was really nice and allowed all of the students to get to know each other before going home with them tomorrow. Now we know the museum is very popular, but today must have been the day for all primary school outings as there were so many primary children, all in straight lines, following one member of staff with a long flag and whistle, very regimented and very different to our primary school outings. Students had a go on the gyro seat, tested their fitness levels, competed against a table tennis serving machine and, experienced how weight differs in space. Lunch at the museum was a traditional Chinese chicken dish from the well know Chinese fast food takeaway (KFC). This was Mrs Wheatleys first ever KFC, and where better to try it out! Although not quite what we were expecting, the students really enjoyed it. The chicken burger, wings and chips didn’t take long to polish off at all.

From here we walked over to the Flea Market Plaza with 13 very excited students ready to unleash their best bargaining skills and Mandarin on the un-expecting market traders.  Thirty minutes later and 3 Rolex’s, numerous Beats headphones and Beats pills, chop sticks and of course the waving cats. Students were fed up of stall holders trying to sell them everything under the sun! 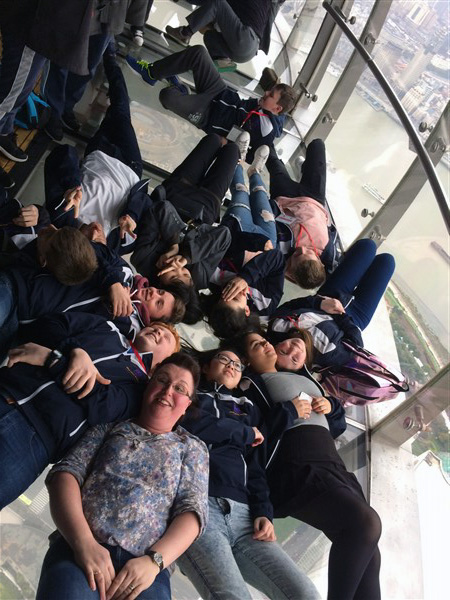 Next stop was the Oriental Pearl Tower. This is always a highlight, right in the heart of the financial district, surrounded by the skyscrapers. Before heading up we walked around an elevated walkaway and could marvel at the urban landscape, the very top of the highest and newest  building – the world Financial Centre was in cloud! After a quick drink and the teachers topping up of caffeine levels to ‘approaching human’, we headed up the tower. The lifts zoom up at an ear popping rate and we exited at the first observation level, a chance to have a view out over the city and down to the Huang Pu river, with its endless traffic of coal barges. Also to view the Bund, the old harbour side with many old buildings, formerly banks and training companies, established when Shanghai was a major trading partner in silk, tea and opium in the 18th and  19th Century. The observation deck is circular so we could walk around and see the city. We then headed down to the lower observation area with the glass floor, students were not at all tentative, stepping out onto the glass and seeing the city way below. A great photo opportunity.

Beneath the tower is the Shanghai Museum. This was great museum for the students, not filled with lots of exhibits with small close printed cards to read, but lots of recreations of Shanghai through the ages from the small fishing village it was in 750 AD to the booming years of the 1920’s. We slowly wandered through taking in the sights and smells of the city. 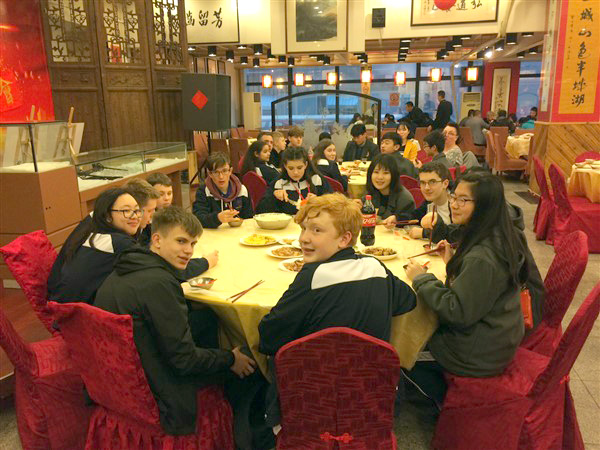 We left the museum and walked to a restaurant for dinner, a wonderful range of Chinese food, tofu, fish (some of the more adventurous students went for the eyeballs!) and another really good soup.

The whole day we have been accompanied by the students that are hosting our students on homestay, so it has been great for them to get to know each other, I think now all are really looking forward to having a homestay weekend and the chance to relax, they go on homestay tomorrow, I don’t quite know where the first week has gone!

After dinner we got on the bus and negotiated the traffic, keeping our eyes open as we drove across the city to the ERA circus show. This is the 7th time I have been and I still think it is one of my highlights of the trip. Words really can’t do justice to what the show involved, amazing gymnastics and acrobatics, some on bicycles! (Mr Smith took a few notes and some ideas for trampolining lessons)

The highlights as ever were 8 motor cycles all driving around and crossing over in a spherical metal cage that hardly looks big enough to fit them in. The circus was full, interestingly most of the other tourists we have seen at the tower and around today are from Iran, many large tour groups.

The bus back to the school took a little longer than usual as a few wrong turns were taken and interesting U-turns negotiated. Back in the dorms we had some snacks supplied – brioche bread with a small sausage hidden inside. Students then headed straight to bed. All are tired and we have a morning of lessons tomorrow.

We are still hoping for a heatwave, but have heat coming out of the aircon units in all the bedrooms, except Mr Smiths!