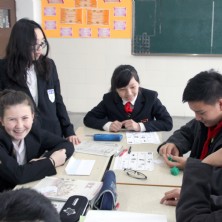 Our second week started with bright sunshine and warm weather. Quite a change to what we’ve been experiencing. Today was a full on busy day of teaching for the students and started with, what has become our regular breakfast of spring rolls, cold fried egg and a choice of steamed dumplings, with sweet milk to drink. 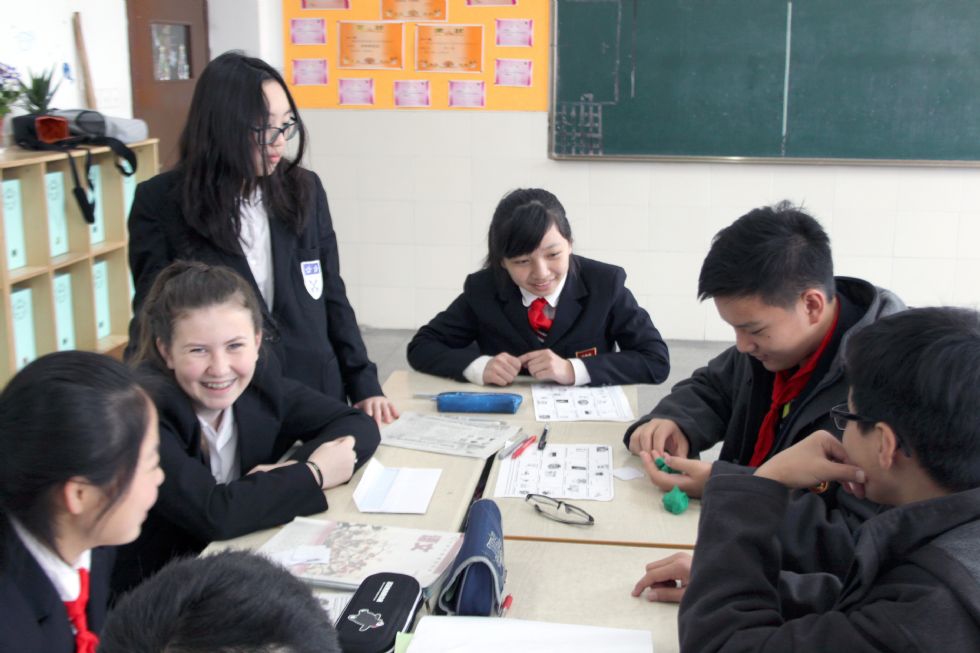 Our second week started with bright sunshine and warm weather. Quite a change to what we’ve been experiencing. Today was a full on busy day of teaching for the students and started with, what has become our regular breakfast of spring rolls, cold fried egg and a choice of steamed dumplings, with sweet milk to drink.

The students had some time to go over their session plans and prepare their resources and soon we were in with our classes, there was a real contrast this year, one group had Grade 2 (5 years old) and the other grade 7 (10 years old). With the older students we did some language teaching through our ‘find someone who…’ bingo (this has been successfully run for 7 years now, and is still a winner), then Rapidoh, where students have to make an object out of play-doh based on the card that they select for others to guess. With the grade 2 students they taught them a song, ‘Old Macdonald’ a new one for this year to replace ‘head, shoulders, knees and toes’. Also the Rapidoh. This was a great opportunity for students to show their leadership skills, a challenge when there is a language difference, but some really stepped up to the mark, and gave clear instructions and solid demonstrations. Soon the rooms were buzzing as the Chinese students were working with each other to develop their vocab.

We taught 2 lessons, and in-between had the flag raising ceremony, this was a great event once again, all the middle and high school students marched onto the school field and stood to attention. We stood on a raised podium with the Gold Apple staff and faced the students, the Chinese flag and Union flag were then ceremoniously marched out and raised up the flag poles as respective national anthems were played. There were some welcome speeches by Robin (Vice Principal) and students form the Gold Apple School, and then Mr Barwise gave a short speech, recognising the links that we have developed between our schools and our countries in our 9 years of partnership work and our 7 China exchange visits.  Alfie and Melanie also gave a short speech to thank the school for making us so welcome and also to thank the students for taking them into their homes at the weekend.

After our second lesson we had formal photographs near the Gold Apple fountain, joined by the students from the morning classes.

Last week were fed in a separate dining room, and the school has tried to give us a selection of western food, so this week we were keen to eat in the main canteen and try some more traditional Chinese fare. In the canteen there are 20 or so serving hatches where student can get a wide range of dishes, including stir-fry, noodles, mystery soup – a name we have given to a soup where all sorts of goodies float up, a small sausage, small egg etc. The students went off and made their selection and then all tucked in, a real success and they are certainly becoming more adventurous with their eating and willingness to try new food.

There was a short time after lunch to change from school uniform into sports kit and then we were on the electric bus to go to Pu Guang migrant workers school, this school serves one of the poorest communities in the city. Parents have come from Anhui province to work in the factories, as the students are not Shanghainese the government does not fund the school, it is quite run down and survives on donations from local businesses and some funds from Anhui, but this is not high and teachers’ salaries are very low and retention is difficult, this year there were notably less staff than we have seen previously. This was the 4th year we have been and it is always a humbling experience. We had 2 classes to work with, students were 6-8 years old  and large classes, 40+, we started with dodgeball. Communication has to be by demonstration largely, but we were lucky to have a couple of Gold Apple students who could assist. Initially what seems like carnage soon develops into a game of stuck in the mud, then onto throwing and catching practice and before we knew it a 4 small games of dodgeball. The nervous faces of the Chinese students were soon beaming smiles. We then merged 2 teams to make a larger game. Again the skills of students and their leadership were impressive, especially as this was the second teaching activity of the day and in hot sunshine. We nearly had one slightly traumatic episode when a child of about 1 toddled through the game, the son of one of the school staff who clearly wanted to join in. He was scooped up and carried off the court by Mr Barwise  and entertained by having cones put on his head as a hat and then playing with Mr Smith. Child care and teaching dodgeball, now that is multi-tasking! Mrs Wheatley hadn’t been to this school before and was amazed by what she saw, especially by the ‘eye exercise’, these are run in class twice a day, massaging around the eyes in order to reduce eyestrain by the students. They are run in all schools and have been for many years. 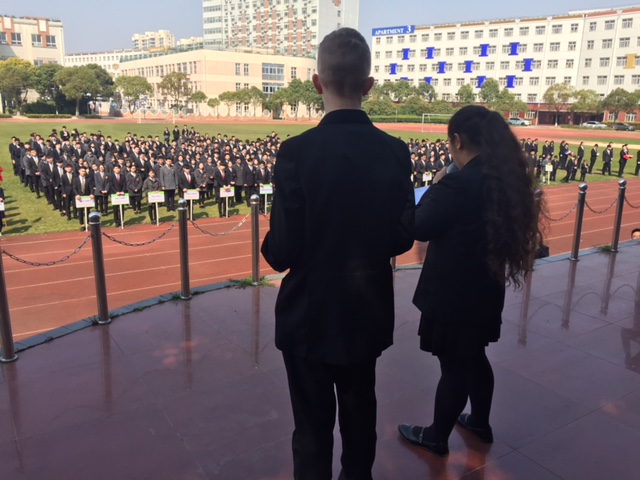 After dodgeball it was up to the classrooms for some songs, again we split into two groups and soon had rousing, if somewhat tuneless, renditions of ‘Old MacDonald had a zoo’ and ‘heads, shoulders, knees and toes’ emanating from the classrooms. Actions and animal noises all part of the fun, again after some initial confusion and failing totally to separate the groups into mixed groups, they kept heading back to be boys with boys and girls with girls, we had them all actively taking part. At the end of the session we issued our gifts to the children, pens, finger puzzles and Frisbees – all Jack Hunt branded! What we left there were 100 very happy children, all out on the playground throwing Frisbees! We said goodbye and thank you to the school vice-principal and then boarded the bus back to the Gold Apple school.

A short bit of down time before tea, then students played football on the pitch or chatted away the evening. Mr Barwise was taken out by the leadership team of the Gold Apple school to have a meeting with some representatives from the Pu Dong education bureau, they are funding a range of summer schools in China and also visiting the UK in May and are keen to come to Jack Hunt. A further meeting is planned for tomorrow evening. When Mr Barwise got back to school we walked the students to the supermarket, so they could stock up on traditional Chinese snacks(!) and now back at school they are in their rooms. Another busy day tomorrow as it is the sports festival, another test of leadership skills.

All are well but feeling tired!