After an evening of planning with excited students we hustled them all off to bed and hoped that all would have a good sleep after some time back together in the dorm rooms and sharing stories of homestay adventures.

After an evening of planning with excited students we hustled them all off to bed and hoped that all would have a good sleep after some time back together in the dorm rooms and sharing stories of homestay adventures.

Today the weather has broken and we have faced a great deal of heavy rain, not really impacted upon plans other than 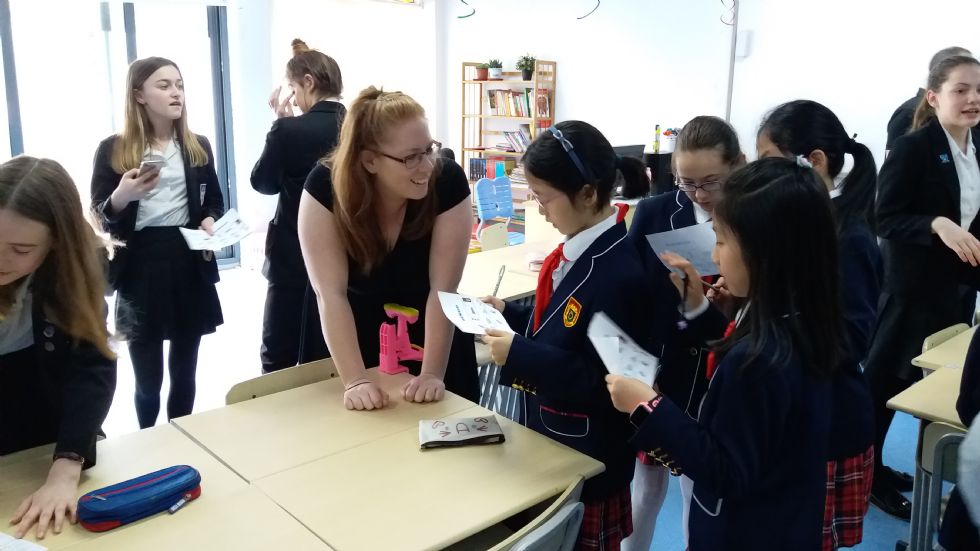 deciding that a walk / swim to the shops will not be on the cards this evening! Forecast is much better for tomorrow.

We headed down to breakfast looking quite sleepy, (one had  to nip back up to the dorm realising that they were wearing school uniform and slippers, rather than their school shoes! I won’t name any names, but it was definately not Summer)

After breakfast we went across to one of the teaching blocks to deliver our English lessons. We had 3 classes, grade 3,4 and 5, so students range from  aged 7, 8 and  9. These are primary students  and as they are at a bilingual school their lessons are delivered in English, so their language is generally very good, some who have newly arrived at the school have less but are soon catching up. We again delivered some well used and trusted lessons, ‘bingo’ and ‘rapido’. Students nerves were overcome and they stood at the front and explained the tasks and in no time at all the students were up asking each other questions to find friends who they could add to their bingo sheet. With Mr Barwise's group, unusually, none of the students wore glasses, so the question ‘do you wear glasses?’ was directed his way for the duration! Then students were making objects from ‘play-doh’ for their partner to guess. Then once guessed they had to use their word in a sentence and were encouraged by our students to develop longer and more descriptive sentences. A highlight was one lad who had made a ‘foot’  when asked to use that in a sentence came out with ‘my foot is smelly’!

The Chinese school system is quite different and it is interesting for the students from Jack Hunt to see how this works. Students remain in the dame classroom and it is the teachers who move. Twice a day students have ‘eye exercises’ this is a national programme, started back in the 1950’s, students massage their eyes and forehead along to a song. This was introduced by the government for all schools to tackle eyestrain, a problem as students focus on writing the intricate characters. Also in classrooms we saw some frames on the desk which are used to help the students keep a correct posture when writing and avoid being too close to their work. Twice a day also the primary students have a 10 minute exercise period in between lessons, we joined in (with varying degrees of success) with a kung-fu session.

We are all feeling pretty tired, so it was nice to have a bit of down time in-between sessions today and not be as busy as 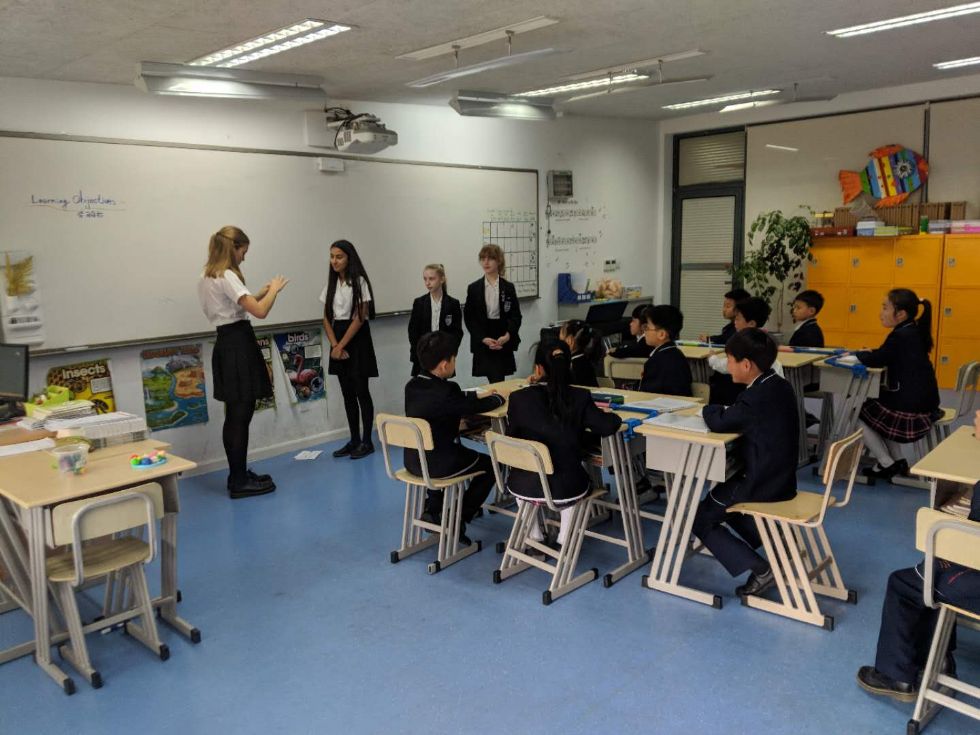 the rest of the week promises to be. Lunch today though was quite a special occasion, we were informed that Mr Jaing was inviting us to have lunch with him in one of the new meeting rooms. Mr Jiang is the owner of Ya Long group. This is the company that owns the school. The main business lies in construction, industrial cable production and hotels. He has stepped back in terms of his role and his sons have picked up the reins, so his primary focus now is upon the educational arm of the company. This has included overseeing the redevelopment programme at the Gold Apple School, but also the expansion of the education aspect of the company. This includes now 12 schools in China, and 2 recently acquired schools in California. He is looking at buying a school in Sydney, Australia next. With these overseas developments he has also purchased property overseas and Mr Cooke, Miss Shirley and I were delighted to be offered the chance to stay in his new home in Beverley Hills.

After  lunch we had a martial arts lesson. This was great, we stared off with Tai –Chi learning a complex series of linked and relaxing moves. It is clear that some of the students are dancers and Abby and Kim clearly worked through the routine with the expected grace of Ballerinas. Similarly Mr Barwise worked through the routine with all the expected grace of a former rugby front row forward. After Tai Chi we were taught a 7 move Kung-Fu routine. Much faster and higher impact than the Tai –Chi, the Chinese teacher showed excellent control, strength and poise. Our PE teacher – Mr Cooke, less so!

All fired up by our kung-fu we headed to the school coffee shop and bakery, and of course, in accordance with our healthy eating policy took full advantage of the 3 for 15 Yuan doughnut offer, fresh fruit smoothies, and coffee! Then to the cinema. This was a great set up a 36 seat private cinema, comfy seats and cup holders. (another new addition to the school this year) The lights dimmed and we watched, what else, but Kung Fu panda 3! The warmth and the dimmed lights were too much for a few, and what we initially took to be a problem with the sound system was in fact the gentle snores of several viewers. One of whom was definitely not Miss Shirley. As the final credits rolled we tried to gently wake up Simran and Grace K. Grace nearly shot up to the ceiling, and Simran seemed determined to keep snoozing.

Dinner swiftly followed. The students headed off to eat and Mr Cooke and Mr Barwise had a meeting with some of the Chinese staff to start making plans for the return visit. We think we have dates so please add to diaries:

I hope that these dates are OK for all.

We believe that there are 15 students coming.  Although Lucy seems to have invited at least another 50 to come along to stay at her house (just a heads up Mr and Mrs Ralfs) – I seem to recall Will doing the same last year. So if any parents any spare air beds, mattresses, tents or caravans, motorhomes etc, these may need to be dropped round!

When Mr Cooke and Mr Barwise finally arrived at dinner we were pleased to see that the students had left some for us…. just.  They had managed to leave a lot of vegetables however, and a rather delicious curried potato dish….

Over to Mr Cooke

After dinner which again was very nice we headed up to the meeting room to start planning our dodgeball and English lessons for Pu Guang school tomorrow. This is the migrant worker school where the class sizes will be a little bigger and students there will have very little if any English at all, a very different experience to today. Students are really getting the hang of leading now and are starting to think automatically about differentiation and back up plans, plus dividing up the organising and speaking between the group. They have been very impressive so far and we look forward to seeing them further develop their leadership skills over the next couple of days. As the English as the school is very limited we have to plan and deliver a very different sort of lesson, during the leadership training day before we came out students adapted and edited the Superman song to replicate the day in the life of a student, all using very basic English and has actions to go along with it. We got the students to practice this a number of times so when it comes to leading tomorrow they are confident standing up and singing at the front of the class.

We had some time to kill and have done a number of times today so we have filled the space with a number of games. We have played a game of 5’s, odds on, would you rather and after the planning tonight we had a game of wink murder. The students have been really enjoying these and found it very funny when Mr Barwise and Miss Shirley had to swap glasses! Finally this evening we split off into a couple of groups with some heading off to the canteen which has a piano right in the middle which I think we mentioned last week to practice for some potential leaving party performances on Thursday. The others headed back to the coffee shop at the bottom of the apartment block for a drink and a relax before heading up to bed.

Students are currently showering and chilling out after a slightly less busy day although it has still been brilliant seeing the students leading this morning along with the lessons last week and the sports festival. The reaction of the Chinese students when our students are working with them is absolutely amazing! Seeing smiling, excited and happy faces all around the room is what the whole trip is all about and seeing this first hand really is very special!! I think after we got 13 excited and tired students back from homestay yesterday evening a more relaxed day today and an early night tonight is actually what the doctor ordered and will set us up for the rest of the week.

It really is flying by! 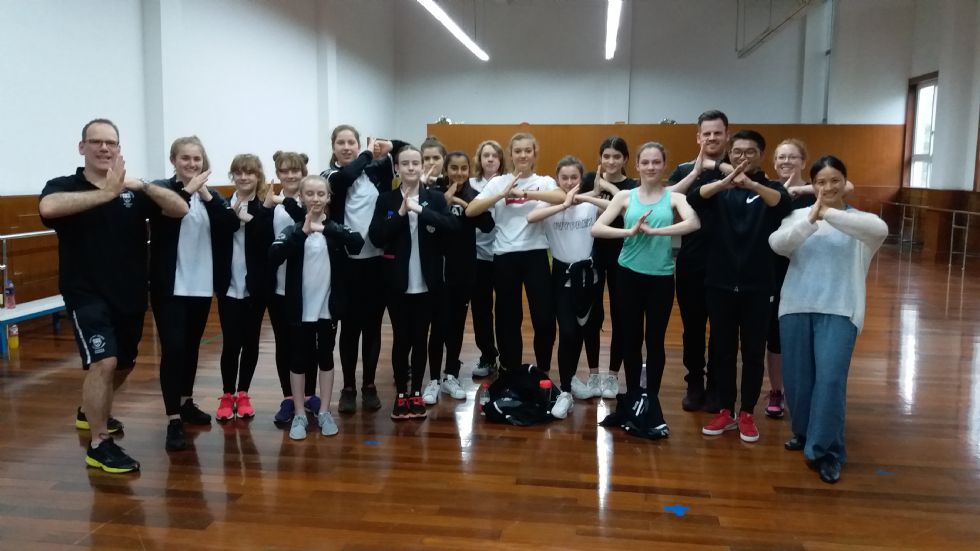