Today has been the day when we have started to have our ‘finals’. Final leadership activity, final dinner in our dining room, etc etc… hard to believe that this is our penultimate day.

Today has been the day when we have started to have our ‘finals’. Final leadership activity, final dinner in our dining room, etc etc… hard to believe that this is our penultimate day. Tomorrow we have a day at Disneyland, what we hope will be a relaxing day in the sun, before heading home.

We were at Pu Xing School today, this is a school that we first develop a link with 5 years ago, and have worked with on a number of projects, both for the British Counsel and Pixl International. Several of the staff and students have visited Jack Hunt School through the exchange programme, or through teacher exchanges and various other projects.

On arrival we were warmly welcomed by Mr Su and Mr Gu, before heading to their pottery. The principal of Pu Xing –

Principal Ren has a background in ceramics and goes somewhat against the grain in Shanghai in that he thinks education should focus equally upon the arts as well as the core academic programme. Hence arts and crafts are a key part of the school. He is also forward thinking with regards to technology. So we were impressed that in the pottery there was a 3D printer that was printing in clay! Instead of the usual pottery the students went to an ICT room where they designed their pots, with the Jack Hunt and Pu Xing logo on, and the best few of these will be printed and brought to the UK by the Gold Apple Students in the summer.

After some confusion as to whether we would be leading or not we finally got round to the dodgeball lesson we would be teaching. We had around 25 students from one class which was very different to yesterday and meant our leaders would be able to develop throwing technique and add some more rules into the dodgeball game rather than just getting them active. Also the students today were of a similar age to some of the leaders we have out here so that adds a very different dynamic, this gave our students the chance to develop a different side of their leadership. We split the group boys and girls and started with the warm ups, both groups went for stuck in the mud, our students really have got the hang of explaining tasks slowly and clearly, always giving visual demos and breaking the task down which really helps overcome the language barrier. JH students were joining in and every couple of minutes they were changing who was it and even making more people it each time to increase the difficulty of the task. After the warm ups, similarly to yesterday, students split the groups in half to make 4 mini groups. Within these mini groups JH leaders all took a small group each and set about delivering some throwing technique practice. On the training day back in school we gave them a number of different ways of doing this as it 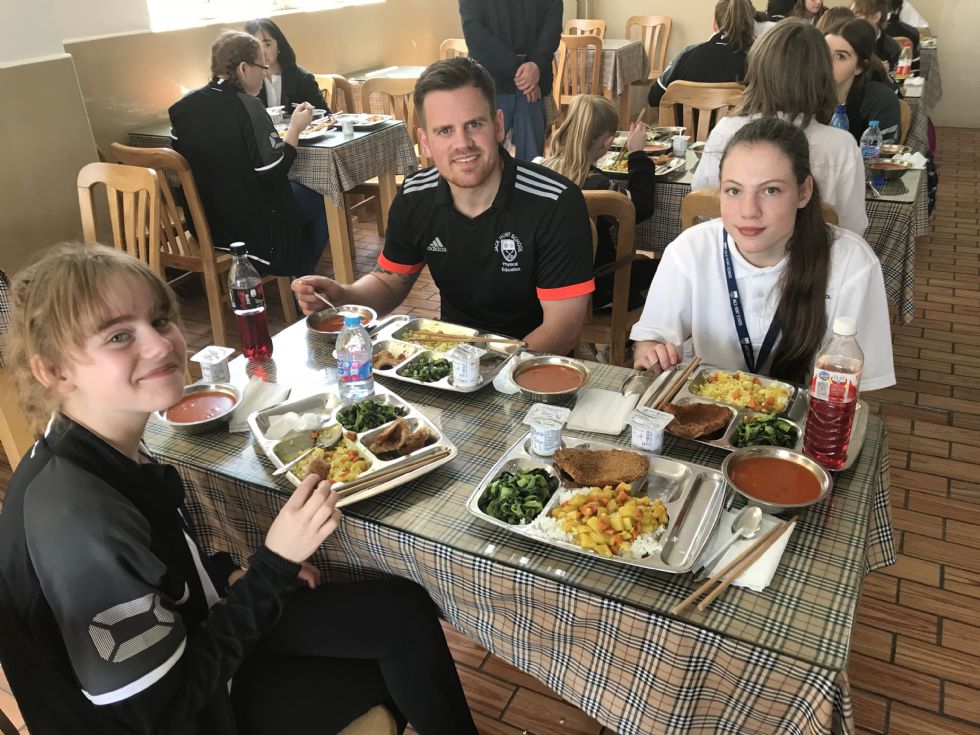 is all situation specific, there is no right or wrong way of delivering it. What works for one age group may not for another, what works for one group size may not for another? What was brilliant to see was looking round the gym all the leaders were delivering this in their own way, this is fantastic as it shows they are thinking for themselves and not just replicating what they have been taught.

We then moved on to dodgeball games, this is always the bit all the students enjoy the most. We started with mini games around 4v4 in the boys group and as there was less girls they just had one game. Compared with the games yesterday at the migrant worker school we were able to add in more rules which meant it was more like a conventional game of dodgeball. Following this we had a big game with all the boys which was absolutely fantastic. Mr Cooke had to get a little bit more involved here and it was very funny to see him conveying messages through actions and the Chinese PE teacher watching understanding exactly what he meant and then conveying this over to the students. There must be something in the DNA of PE teachers as they were both stood on the far side of the pitch, heads moving side to side in unison like you see when a crowd is watching a tennis match. Mr Cooke obviously realised that the teacher was desperate to get involved and put him on one of the teams, next thing we know he is launching balls left, right and centre loving every minute of eliminating the Chinese students on the other team. The girls game was a much more sedate affair however no less enjoyable for the JH leaders and the Chinese students taking part. In what was the final leadership activity the students did themselves and the school very proud and it has been wonderful to see the development of their skills from the first festival we did to y7 students back at JH before Easter. Students have learnt skills that will help them way beyond their time at JH School.

Lunch was very well received, lightly curried vegetables and rice, a pork escallop and greens. The students all tucked in, fantastic tomato soup and all finished off with a yoghurt that was drunk through a straw. Again, I will say, we have been impressed by the students in some many ways but up there   is their willingness to try new foods, they may not always like them, but, just like today’s lunch they can be pleasantly surprised!

After lunch we met the 5 Pu Xing students who came over in the summer last year as part of the exchange. Tom and Andy had grown by over a foot – not sure what our host families had been feeding them, and Grace K. was really pleased to meet up with Joydon who stayed with her last year. The meeting time was a chance to catch up and for the Chinese students to enhance their spoken English.

Our final activity was to head out to Jinnqiao Park for a stroll through the lovely gardens, this is only a small local park, but 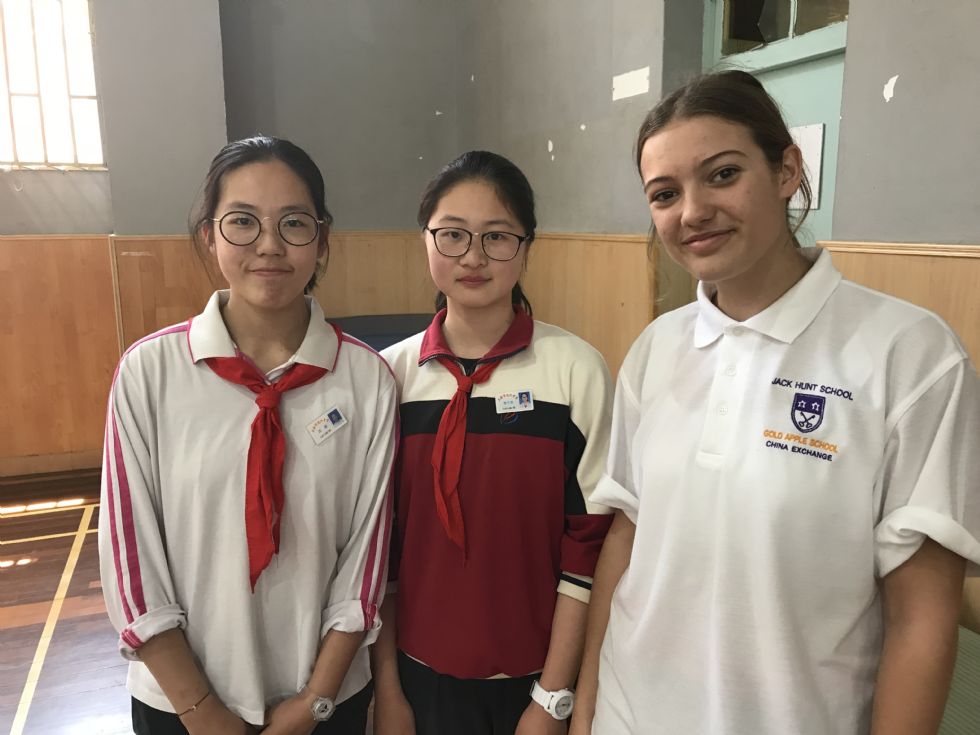 beautifully kept. The lake seemed to be teeming with fish and a few terrapins, Grace and Lydia - our twins were introduced to some Chinese twins (only about 18 months old) and they hit it off immediately! What was lovely to see in the park was that it was full of elderly men and women, whinny you read in the news in the UK about the epidemic of loneliness, it was great to see crowds of elderly Chinese playing cards, singing, listening to music, dancing and doing tai-chi. It seemed busy to us but apparently gets even busier in the evening. A great local community right there supporting each other. An added pastime today was to wave and smile at the school party strolling through their park!

We got back to school early, around 3 and with it being such a lovely day we headed out to the field and relaxed in the sun, games were played  and students generally chilled out, before an impromptu game of dodgeball stared, and some Chinese students joined in. What a lovely end to the day.

After dinner we parted ways, Miss Shirley volunteered to look after the students in the international department, planning and preparing entertainment and speeches for the farewell party tomorrow. Mr Cooke and I headed out for a meal with some of the senior leaders from Pu Xing school and The Gold Apple School, it was also great that Johnson Jiang was able to come visit, he is the former principal of the International department of the Gold Apple School, but recently moved to a new position setting up a new bilingual school in Suzhou. He is keen to develop links with JH School, and so I am sure we will also be visiting there in the future!

Students are settled down now and I think will soon be off to sleep. Ready for our final day tomorrow! 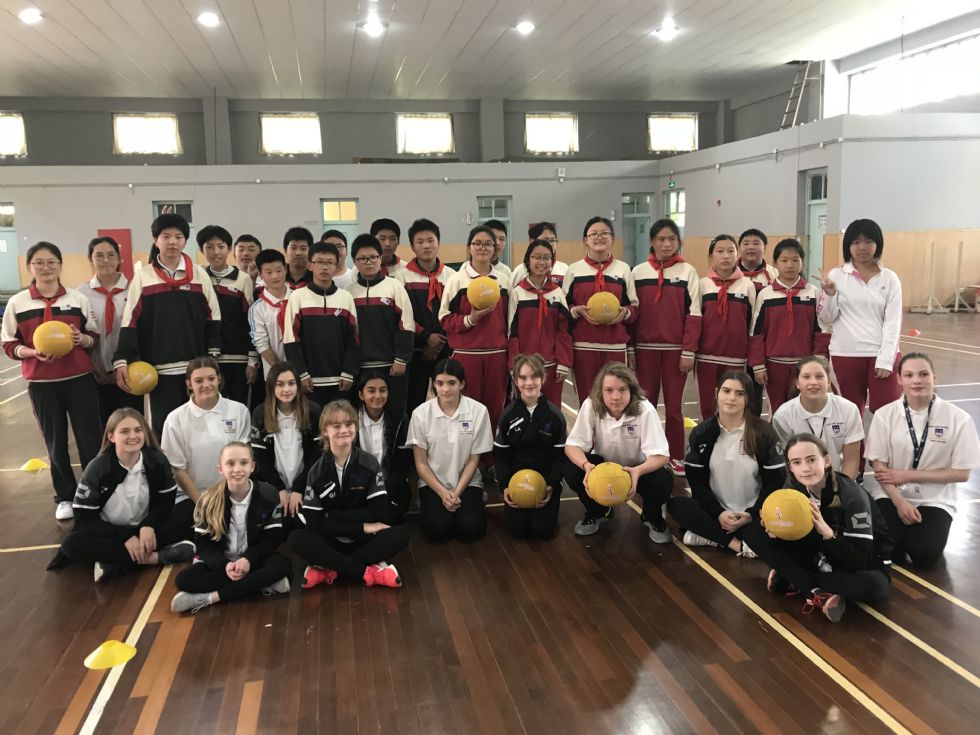