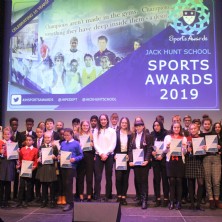 A celebration of student sporting achievements throughout 2019.

Our annual Sports Awards Evening celebrated a fantastic year of sport, showcasing the many achievements of students from Year 6 to Year 13.  Jack Hunt staff and students were delighted to be joined by members of our partner primary schools who had also nominated students who had excelled in sport this year.

Special guest, Olympic Gold Medallist, Emily Diamond was invited to present the awards before sharing her journey to success as a Track and Field athlete at the Olympic Games in 2016.  Emily studied at Loughborough University, where her international success continued and she qualified for her first Olympic Games, London 2012, at the age of 21. Since then, Emily has become one of the country's top 400m athletes and has won multiple international medals including Olympic Bronze in 2016 and World Championship Silver in 2017.

Two of the most prestigious awards – ‘The Linda Dingle Award for the Best Higher Sports Leader’ was won by Arpana Parekh for her leadership and volunteer work in both Jack Hunt School and the local community.

‘The Best Sports Person in the Junior Athlete Education (JAE) Programme’ was won by William Bird (Year 9) who trains with Northampton Saints Rugby team and also plays county hockey as a goal keeper. Not only does he spend many hours training and competing for rugby but he also finds the time to represent Cambridgeshire in hockey.

Assistant Headteacher, Chris Game said:  "The evening was extremely successful and we want to say a huge well done to all the category winners and students who received commendations. It was great to see so many students and their parents celebrating the achievements in many areas of PE and Sport. Having Emily Diamond speak at the evening was really inspiring. I am sure her motivation and dedication to becoming the best she can be will encourage our athletes to keep working hard to achieve their own sporting and personal goals.”

Students that won awards are listed below.  We welcome all students to come and try new PE clubs after school to try to improve their skills further or just have some fun making new friends.

The Sports Council are busy putting together our next Awards. A prize draw will take place to win sporting equipment before Christmas.  Students will be nominated by their PE teacher or included for taking part in clubs and representing the school at fixtures. Look out for the winners soon.