We have about a six week build up for form groups to design their box and decide what sort of content they want to donate. After the lessons in form time, the previous year’s donations were out of this world, raising our hamper donation from 37 hampers to 92. I was dubious as to whether we would be able to beat that this year but lo and behold, I did the hamper count in the morning and find 103 FULL hampers to deliver to our charities. This is astounding! When I think about the generosity of our students, both in our Jack Hunt Community and in our Trust Primary schools (Thorpe, Longthorpe, Ravensthorpe and Middleton) who donated so many goods to this cause, it fills me with pride because I can see the difference that they are making to Peterborough’s disadvantaged communities.

First, KMKR Tutor Group, Ms Keber, Mr Piper and I started at the Foyer, Peterborough, where we were greeted with big grins and looks of amazement at the sheer beauty of KMKR’s hamper. Next, we went on to The Peterborough Soup kitchen where we met John, a wonderful man who told us just a little bit about what the soup kitchen does and how it provides warm meals every single day. We were amazed that every single person involved with the charity are volunteers. 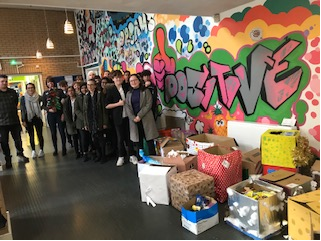 Next up was MABE Tutor Group with their incredibly thoughtful hamper (this category was the hardest for the teachers to decide because so many of the forms had made such considerate choices with their hamper donations). We started off at New Haven Homeless shelter where both employees were so pleased to greet us, and where we all squeezed into the tiny office for a picture! Our final stop on the Hamper Express was to the Salvation Army. We were shown into a back room that resembles Santa Grotto, with various volunteers acting as the elves.

Every single charity was amazed by the absolute volume that had been donated and were so, so grateful.

What with it being Friday 13th AND the day starting with a full moon still very visible in the sky, every literary trope was giving me ominous signs that something bad was going to happen AND YET, the day was a complete success. All students were impeccable representatives for the schools (the staff weren’t so bad either!) and a jolly time was had by all.

Thanks again – we couldn’t do this without the generosity of our Jack Hunt Community.