Once the students had set up their activity, they had time to have a bit of a run through with the Chinese leaders before the primary school arrived

After what was probably the longest sleep so far it seemed harder to get up than ever, however the students were all down for breakfast looking very smart in their school uniform. Breakfast today went down relatively well, it was the first time we had seen spring rolls and the students were tucking in. After breakfast we took a little walk around to the front of the building to get our usual picture with the schools logo in the background. 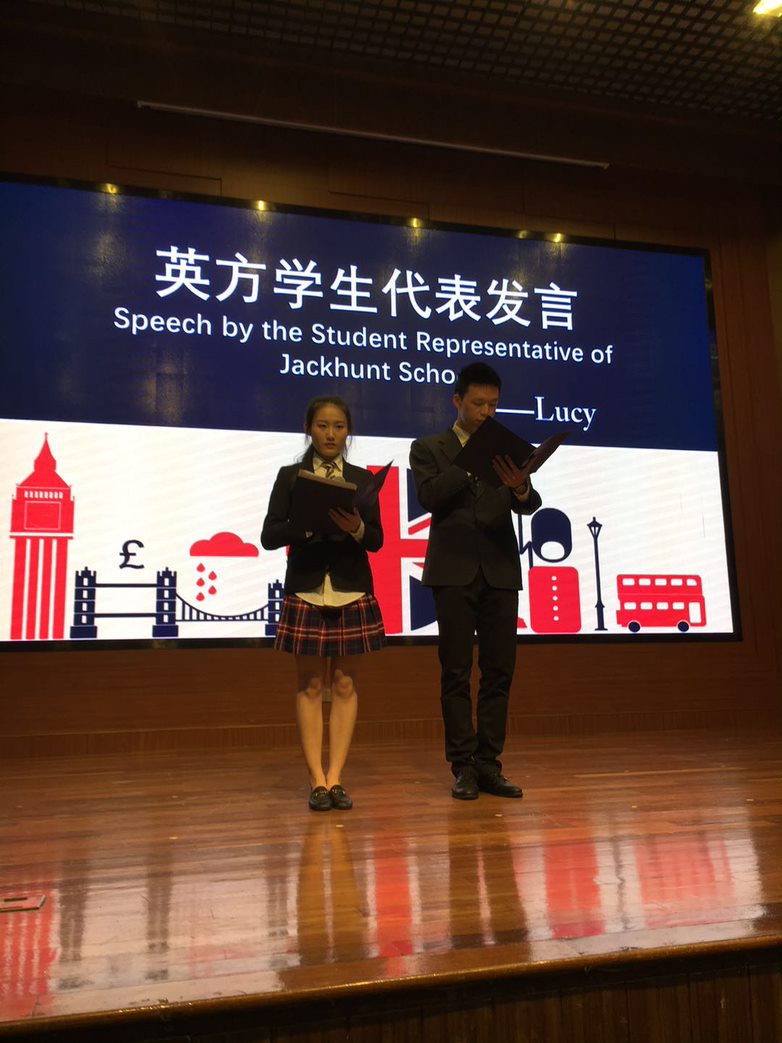 in the auditorium to welcome us to China and The Gold Apple School. As we arrived on Wednesday this year and the school is in peak exam time, today was the first day they could fit it in. 2 student union representatives led the ceremony where both national anthems were played (all nearly 3 minutes of ours), Principal Eugene and Mr Cooke gave speeches emphasising the importance of the links and the friendships the two schools have made over the years and how beneficial it is for students from both countries. Our students also introduced themselves one by one and said something they had enjoyed or were looking forward to before Lucy gave a lovely thank you speech on behalf of us all. She spoke very well indeed as did they all, it takes some nerve standing up on stage in front of a few hundred people.

After the ceremony we went off to plan the sports festival with the students who are hosting along with the others who are coming over in the summer. First of all the students just had a catch up which was lovely to see them just chatting and then our students went through the sports festival concept and in particular the station they would be leading together. As this didn’t take too long some of the student union students arranged some traditional Chinese board games that the students could have a go at together. For me one of my favourite things is watching the students interact together, some of the lifelong skills they are learning will be invaluable.

Lunch was again some traditional Chinese food where students could choose from a variety of things and hopefully find something they liked, it was more successful than some had been with some curried beef and potatoes, prawns, rice, chips, various vegetables and soup. After this is was time to head back to the dorm and get our PE kit on for the sports festival.

Once the students had set up their activity, they had time to have a bit of a run through with the Chinese leaders before the primary school arrived. A new member of staff called Elise seems to be looking after the primary part of the school now and she is so keen to come over and visit the UK to see education. She has had a number of chats and meetings with Mrs Hudson over the past week. I just thought I would double check the numbers with her as they were arriving, we were told to plan for 90 and we always end up with a few more but we always manage. Today the group seemed a little big... 175 students ranging from age 6-13 arrived to participate in our festival bearing in mind that some of the students we have here are only 12/13! The students took it all in their stride and we quickly formulated a plan to make sure the festival was a success. It was organised chaos... There were students everywhere but our students really stepped up. There wasn’t a student in the room who didn’t have a smile on their face and wasn’t loving the activities. The festival ran for about an hour and we then gave every student a lovely colouring book gift that Mr Wheeler had prepared in school that had a number of famous British landmarks and a word search to complete, some colouring pencils and a certificate. Lots of them had already had a wristband gift celebrating the partnership between the schools from the leadership last week. It was certainly a whirlwind couple of hours but they all had fun and practiced their English with native speakers which is what it’s all about. 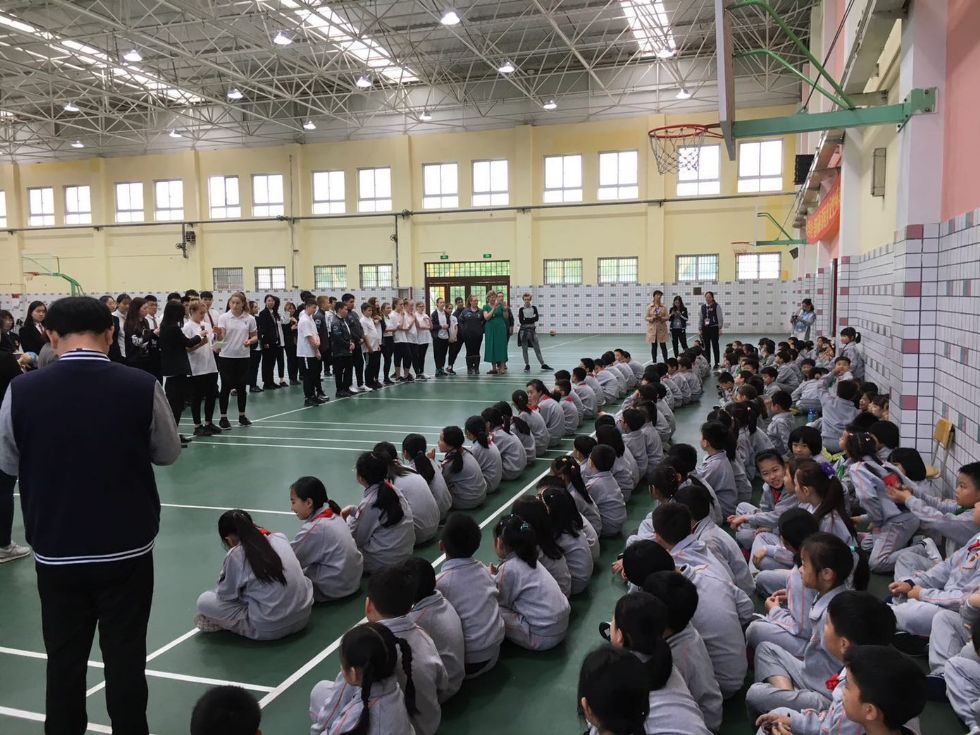 Once the festival had finished we were off to our calligraphy lesson which had been rearranged from last week when the teacher was ill. We watched some traditional symbols being written and learnt some history. Students were shown the symbols for mountain and water along with the most complicated symbol in Chinese which was pronounced “pin pin” and translated to a certain type of noodle, it takes 50 strokes with the brush to make. We had the chance to practice some of these before making a joint picture with the teacher. Students seemed to really like the lesson, it was much calmer after the mad couple of hours before.

Dinner was in the schools new western restaurant that we were only informed about today and it went down well with the students. Pork sausages, spaghetti, fried chicken, butternut squash soup, watermelon and a dessert. Quite a few students went up for seconds. Following on from dinner we took a few to the supermarket for a little walk out and to grab a few bits for homestay while most students stayed up in their rooms tidying and packing. Later on we gave them the option to watch a film in the fancy meeting room or visit the gym again, surprisingly the majority decided to go to the gym with a few choosing to take a nap/watch the film. In the gym students were working out, dancing, practicing ballet and even having some competitions with the Chinese students.

Finally before bed we double checked that students had packed and answered any final questions they had about what to take with them and just general questions about the homestay. It is such a brave thing to do but it is definitely one of the most rewarding. Tomorrow we will spend the morning the Pearl Tower in the morning before the students go off with their homestay students in the afternoon.

Only 3 nights left after tonight and we will be on our way back to England. 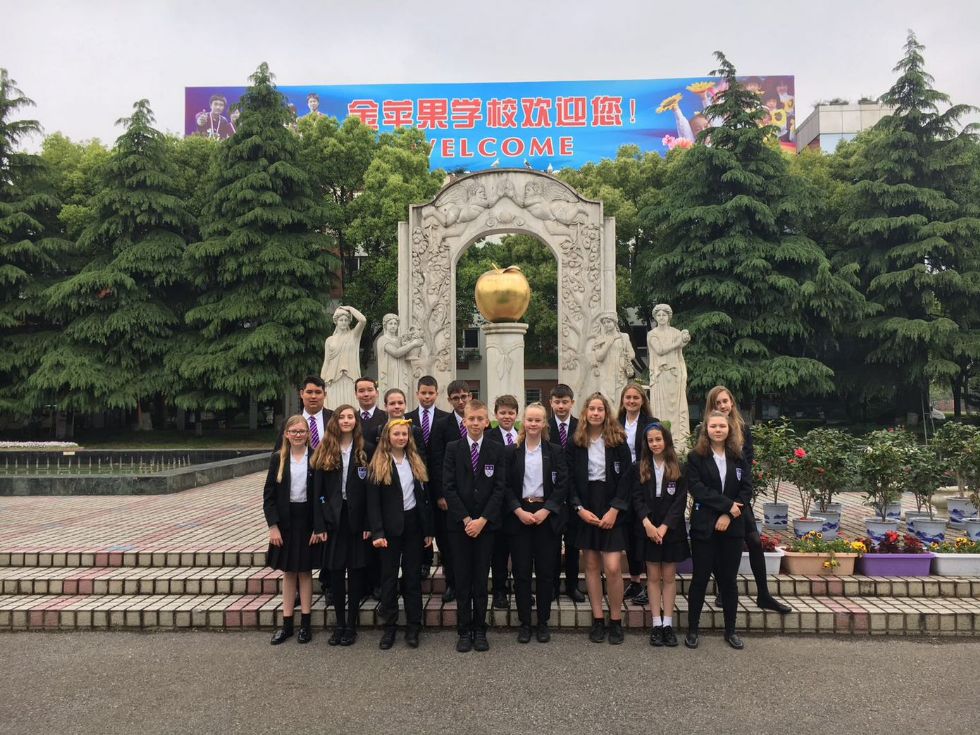