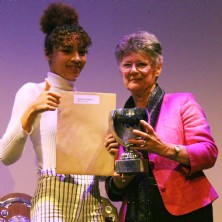 A celebration of Student's success and achievement

Jack Hunt School’s annual Presentation Evening was held on Tuesday 17 December. The event was a wonderful evening which saw many students, staff, parents and honoured guests come together to celebrate students’ achievements throughout their time at Jack Hunt.

The special guest speaker was Linda Melvern, who presented awards and certificates to the GCSE and A-Level students as well as special prizes to those students who were best in their subject. Linda Melvern is a widely published investigative journalist and author. She is an Honorary Professor in the Department of International Politics, University of Wales, Aberystwyth. A consultant to the Military One prosecution team at the International Criminal Tribunal for Rwanda, part of her archive of documents is used to show the planning and progress of the 1994 genocide. Linda Melvern has written six books of non-fiction and is widely published in the British press and academic journals. She is the second vice-President of the International Association of Genocide Scholars. Linda motivated the audience by sharing her experiences and the impact hard work and resilience can have in ensuring success and eventual international recognition.

The evening came to a close with the Head Boy, Peter Whyman and Head Girl, Alyssa Hammond thanking Linda for her motivational and inspirational story that showed the importance of resilience and tenacity. The musical performances from the Senior Choir, Jazz Band and sneak preview of the school musical ‘School of Rock’ were of the highest quality and very enjoyable. Thank you to all involved who made the event a great success.