Paralympian and ex-student of Jack Hunt School James Fox has been honoured with an MBE from HRH Queen Elizabeth. 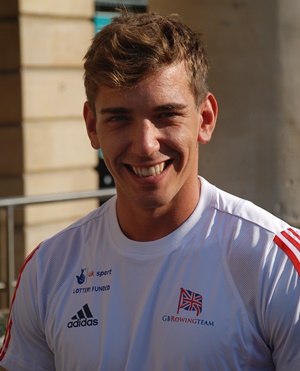 Paralympian and ex-student of Jack Hunt School James Fox has been honoured with an MBE from HRH Queen Elizabeth. James started rowing at the age of 11 with Peterborough Rowing Club, competing as part of the GB Rowing Team at the Coupe de la Jeunesse as a junior. James continued rowing at the University of London Boat Club whilst studying Sports Science at Brunel. While he was at university he broke his back in a car accident, preventing him from training for two years. As James recovered his coach at the time, Brian Young, encouraged James to seek a place with the para-rowing squad – and the rest is history!

From 2013 to 2016 James’ senior career took off  as he won gold in three world championships and then in the Rio 2016 Paralympics as part of  the LTA mixed coxed fours. January 2017 sees James in extensive training, an undefeated gold medallist aiming to better himself for Tokyo 2020.

After receiving his MBE James told Mr Game, Assistant Head Teacher at Jack Hunt, that "It's a huge honour to be recognised by HRH The Queen for our successes in the summer. People like me aren't supposed to be awarded MBEs, but it should fill Jack Hunt pupils with the confidence that it could be them next.”